When Donald Trump ran for President, he claimed that he would bring back the coal miners, and the clean coal business. Disregarding your personal affiliation for the President, you have to wonder if in fact he will stick to that promise, and if he does, what will it mean for the coal mining and coal powered industry? Bear in mind that I didn’t go into this looking for coal companies, but rather one happened to weed its way through my screeners, and after taking a closer look, I believe there might be some higher intrinsic value that the market is currently mispricing. That company is Advanced Emissions Solutions, Inc, or ADES.

In short, ADES is engaged in providing environmental technologies and specialty chemicals to the coal-burning utility industry. A longer version of their business description can be found below:

Advanced Emissions Solutions Inc is a holding company that provides emissions solutions to customers in the coal-fired power generation, industrial boiler, and cement industries. Its proprietary environmental technologies enable customers to reduce emissions of mercury and other pollutants, maximize utilization levels and improve operating efficiencies to meet the challenges of emission control regulations. The company’s major activities include development and sale of technology to reduce emissions and improve operations of coal-fired boilers used for power generation and industrial processes. It is also engaged in research and development of technologies and other solutions to advance cleaner energy and to help its customers meet existing and future regulatory and business challenges.

ADES has been in the coal cleaning business for 25 years, and touts itself as one of the leaders in the industry. However, does the company have the cashflows to sustain its operations, and is there a catalyst in the future that will propel its growth and its ability to capture more of the market share?

ADES is manned by President & CEO L. Heath Sampson. Before becoming CEO, Sampson did time as the company’s CFO and Treasurer. Prior to coming onto ADES, Sampson served as the CFO at Square Two Financial, a private equity backed mid-market specialty finance company, where he led the corporate restructuring team.

The company trades at 1.8x earnings, 2.3x book, and 4.4x sales. Compared to its peer averages of 19.2x earnings, 2.3x book, and 1.8x sales, it stacks up moderately. The company trades at 4x EV/FCF, an 83% discount to the sector median. Sporting a FCF Yield of 20.5%, the company has a 915% higher FCF yield than the sector average for the most recent period. Float % sits at 80%, and insider ownership is close to 9%, with 50% institutional ownership. The company is on the smaller side with a market cap of 167.03MM.

The company has no debt and increased its cash position over the last two years. The company sits on $26MM of cash, and it is showing signs of turning its cash flow operations around. Operating cash flow is trending upwards after peaking in December of 2014 at -$40.2M, to where it currently sits at -$11.8MM. Levered free cash flow growth has also been promising. After suffering a loss of $25MM in FCF, the company turned the trend around and in Sept 17 sported $34.6MM in FCF generated.

In regards to its cash, the company has had such an excess of cash that they have engaged in both an aggressive share buyback program, as well as a hefty $0.25/share dividend to its shareholders. The investor should not be concerned with the company issuing a bunch of shares to pay for its business due to the heavy cash balance. If anything, the investor should be interested in seeing management do something with the cash instead of just giving it back to the shareholders (I know it sounds contradictory, but a lot of that cash might be better off invested in a business segment that is thriving). The company also increased its total assets from 61MM in Sept 15 to 107MM in Sept 16. They did this all while heavily reducing their liabilities from 86MM to 31MM in the same time period.

The company experienced a decrease in revenues and gross profit mainly due to its winding down of equipment sales business, however, they were able to increase their operating income from 27MM in Sep 16 to 36MM in Sep 17. Net income trends upwards as well since Sep 15.

So how does this company make money? The company has a refined coal segment, a chemicals business, as well as an Emissions Control segment. It’s a three – pronged strategy designed to capture a wide array of the market within their industry. The company uses wholly – owned subsidiaries to accomplish this, ADA and Tinuum. Distributions for the Tinuum segment of the business came in at $11.9MM, a bit above the $10.7MM total from last year. The company also had a YoY increase in royalties from their RC (refined coal) units.

The company provides refined coal processing, emissions testing, as well as proprietary chemical products designed to reduce erosion significantly in plants that use the refined coal (this will come into play later).

When it comes to their chemicals business, the company admits that this business will not be as stable and forecastable, saying in their most recent 10-Q:

We also continued to validate our proprietary patents and related products within the chemicals business. Though revenue was down sequentially in our chemicals offering, remains higher on a year-over-year basis and we expect this nascent business to provide lumpy quarterly sales as we test and build out the viability of our products within the consumables market.

The chemicals industry is getting hit hard by companies coming in and under-cutting prices to the point where it forces larger companies to compensate and lose margin, and thus income. The company acknowledges this is taking place by saying, “Competitors have lowered their prices dramatically in an effort to maintain market share or even survive.” In other words, companies are taking last ditch efforts to say solvent. The company has a healthy acquisition pipeline, and when the dust settles from the under-cutting companies, they should still be situated nicely.

I want to re-examine their cash position, which increased 100% YoY. The company says that their current cash levels have, “provided us the necessary liquidity to both continue to validate our chemicals business as well as to execute our capital allocation and shareholder return plans.” The company actually plans to increase cash levels, due to the low fixed operating costs of the chemicals business, and plans to have increased cash balances by the end of the next year.

The company is also looking at strategically acquiring companies within the industry to expand its presence, and best of all they’re doing it through their FCF, not debt. 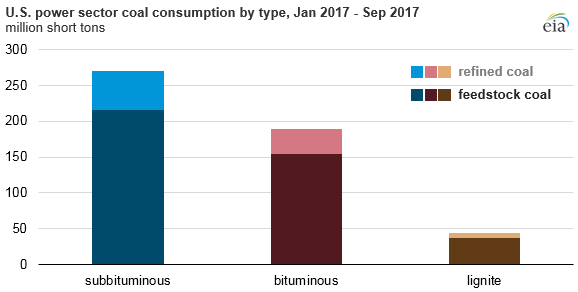 Refined coal has tailwinds heading into 2018 and beyond. According to EIA.gov, the US power sector consumption of coal is increasingly shifting to refined coal, even as coal-fired electricity generation decreases. This is coming off the backs of a 17% increase in refined coal in 2016, followed closely by a 19% increase in 2017.

Coal is closely tied to the price of natural gas. Higher natural gas prices are another tailwind for refined coal, as well as an increase in steel production from Asian countries like China and Japan. This is due to the robust increase in their economic footprint, and although they could produce it themselves, it is more cost-beneficial to have it imported from the United States. Asia’s demand for coal could be a huge driver for the industry. According to the Southeast Asia Energy Outlook 2017, almost 100 gigawatts of new coal-fired generating capacity is expected to come online in the region by 2040, nearly doubling its current capacity. The players to look for when it comes to increased demand is Indonesia and Vietnam, both countries I am highly bullish on heading into the future.

It’s also been studied that the globe has about 112 years worth of coal left in reserves, compared to the 46 – 54 years of oil and gas reserves on the planet.

Erode Away the Competition

If there’s one catalyst besides the solid cash position of the company and their non-existent debt, it would be their actual chemicals product. The company owns the patent and license for arguably the best erosion control chemical on the market. According to Heath Sampson, the company’s propietary technology enables a consumer to reduce their erosion of their facilities by 10x, that is a huge advantage. The company argues that the competitors product is more corrosive and that that is a major advantage for them at ADES. Not only is it more practical and affordable for power plants, but it makes it easier from a supply chain perspective because there is less chemical you need to get the same and better protection for your plant. This is one of the biggest and most exciting advantages for the company.

Decreased economic growth in Asian countries, coupled with lower natural gas prices, as well as a drastic change in the administration’s promise to bring coal back could all derail the path towards increased shareholder value. Also, if the company isn’t able to shake the under-cut prices from smaller companies trying to salvage market share, it will do damage to their margins and income, thus reducing overall cash levels. I would like to see the firm continue to invest and operate debt free for the next couple of years as well.

There isn’t a clear cut classical chart formation, but I am looking at the support levels hoping those will hold, and I might think about entering once price breaks the 50MA, and if it breaks through the double-top resistance level, I will add to the position. Right now I am sitting on my hands, patiently waiting for the market to give me a softball.

What is ADES Intrinsic Value?

5 thoughts on “Has The Market Mispriced Refined Coal?”