I believe it’s been around two months since I’ve written about a particular potential investment, and most of that can be attributed to sheer laziness on my part. However, I would also like to think that the rush of finals week and the Christmas season played a larger part. During my writing hibernation, the portfolio performed extremely well, with core positions gaining multiples of 5 – 10% over the course of a month and a half. This post isn’t about diving into the portfolio, I will save that for another post in the coming week. For the remainder of this post, I will discuss an extremely undervalued solar energy company, STR Holdings, Inc (STRI). You can think of STRI as a potential deep OTM long call option on the solar energy sector.

The below description of the company is from Gurufocus.com:

The company was founded in 1944 with the goal of designing the leading encapsulants for the solar industry, went public in 2010, and its been downhill ever since. After trading to the clip of $80 per share, the company is now trading at $0.27.

STRI is committed to excellence in the production of their encapsulants, as well as holding themselves to the highest ethical standards of business practices.  The company has footprints in strategic areas across the globe, with the likes of Italy, China, and Spain, along with their headquarters in Connecticut.

It’s no surprise the solar energy industry is tantalizing for speculators like myself, given the tremendous effort by the Federal Government to push alternative energy onto the country, no matter the cost. The global energy industry is expected to reach $422B by 2022, a huge increase from $86B market cap in 2015. Those numbers are equivalent to a projected growth rate of 24.2% CAGR from 2016 to 2022. The chart below indicates the yearly solar installation growth since 2001. 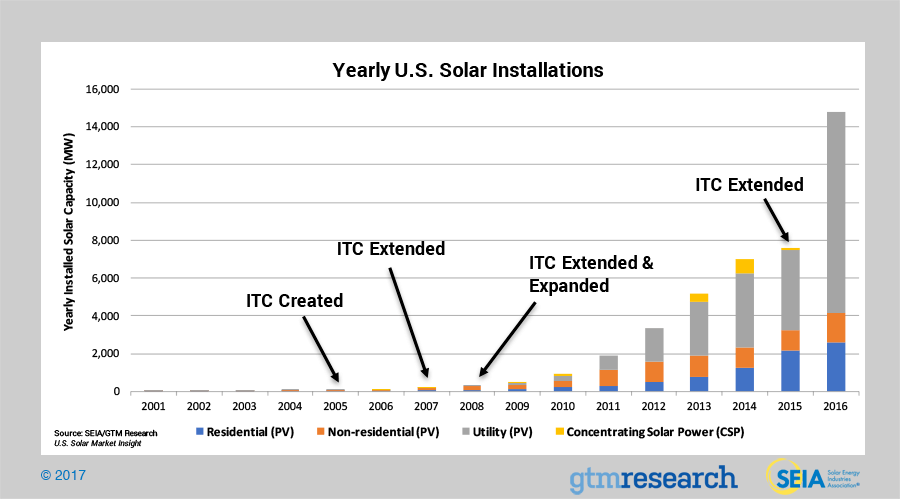 So what is the growth driven by? To me, most of the growth stems from the faux demand created by the government through the use of pollution rebates and government incentives for alternative energy investments. This has always been a red flag for me because it almost feels like this market is being propped up by the government because it’s the “hot thing” to do right now, to become energy-efficient, no matter if the up front costs take years to reciprocate. However, this thinking could easily be flawed, because at the end of the day, wherever the government decides to put their money, it should be a good indication on where investment capital will flow.

Looking into the growth of the industry, one problem we are still facing is a consolidated market share across the United States, as shown by the chart below: 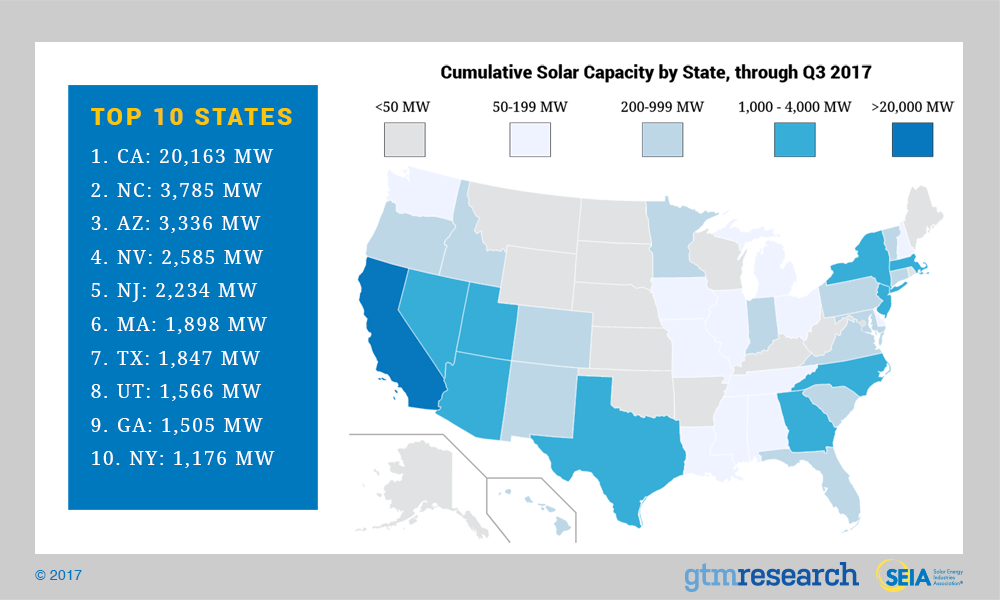 California still dominates the market share with 35% in total. Most of the solar capacity is kept to the outer rims of the US, by the coasts, with the exception being Arizona and Nevada. However, the solar energy market is poised for continued growth.

Although California owns the majority of development, states such as Texas, Utah, South Carolina, and Florida are getting skin in the game alongside.

Corporations, in an effort to label themselves as environmentally friending or ethically heightened, are looking to solar energy as a way to reduce long-term costs, while strengthening their brand ethos. SEIA has a slide deck of the top 10 companies to go solar over the last few years (you can take a look here), but let’s see the top two companies that went solar.

A lot of the selling off of these solar energy companies is due in part to the fact that solar energy isn’t growing as fast as it did when it broke on to the scene in the mid 2000’s. The fact remains, the industry is still growing, God forbid it just doesn’t grow at a consistent 50% clip every year. SEIA.org attributes this slowing down of 50x growth to “installers re-orienting their sales strategies.” In other words, the initial rapid growth phase of the business industry settled, and companies are now faced with the goal of actually creating competitive advantages.

Since the solar energy market is divided into two main categories: Photovoltaic cells and Concentrated Solar Power Systems, I want to focus on the PV cells industry. According to SEIA.org, developers of PV cells, “will be looking to procure new projects with completion targets moving into the next decade. By 2021, there will be over 100 GW of solar installed in the US, with annual totals nearing 15 GW by 2022.” Impressive growth to say the least. 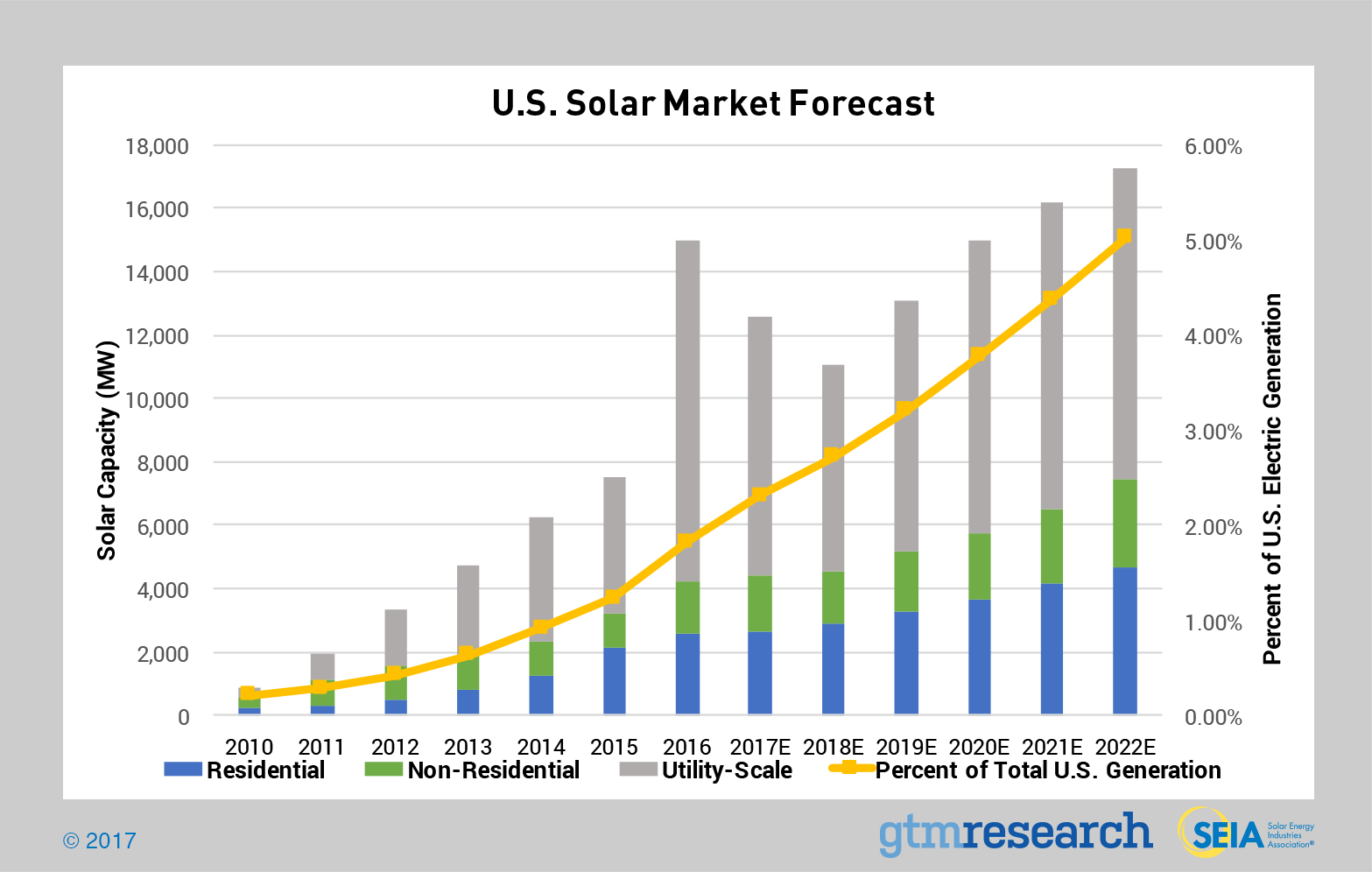 Now that we painted a picture of what the overall industry drivers and mechanisms for future growth are, it’s time to see how STRI fits into all of this. Remember, STRI develops encapsulants that protect the embedded semiconductor circuits of the solar panels. This is important because the semiconductor chips are arguably the most crucial aspect to these solar panels themselves.

The company has no debt, terrible margins, and killer valuation metrics. Looking at profitability and growth, the company sports operating margin of -%65.52, net margin of -%63.82, ROE of -%27.61, and ROA of -%23.31, all of these numbers make it one of the worst performing companies in its industry. Because of these awful growth numbers, the company presents an interesting deep value restructuring play.

Taking a look at the most recent results of operations from the last earnings report, we can see that STRI is turning things around, slowly but surely. The company was able to reduce its cost of sales by $7,000 9 months ended, and $1,000 3 months ended. Gross Profit turned to the black for three months ended, from -$899 Thousand to $141 Thousand. Net loss for nine months ended decreased from -$11,638 to -$4,237, a substantial turn for the better.

How Will They Create Value

It’s all good and dandy to find something that is undervalued relative to its peers, but the question now becomes, where is the future value in this company, and how will it get there? The company has taken steps in the most recent quarter, along with previous quarters, to reduce costs, and expand into new territories that offer potential ROI. The most recent quarterly statement highlighted the changes the company is making to maximize shareholder value.

First, the company is winding down its production facility in China for two reasons: 1) The company incurred a loss of $5.8MM, and 2) There was a massive fire at the facility that damaged nearly half of the entire plant. By doing this, the company reduces its operating losses going forward.

Secondly, the company is engaging in India more directly, through the use of a Tolling Partner. During their analysis of their Chinese operations, the company found out that most of their Chinese business was being outsourced to India anyways. Making this move cuts off the middle man who was China, and it gives the company more transparency and reliability with receiving payments. The tolling partner plan is one that I like, because it enables the company to serve its clients in India without heavy capital investment into that area. However, the company acknowledges the risks in working with an Indian tolling company, something they haven’t done before.

Finally, the company is venturing into the high – end food packaging business. The company reportedly acquired a “significant investment” to enter the high-end food packaging business through one of the companies subsidiaries in Spain. STRI plans to leverage their knowledge and expertise on advanced plastics research and development into this new space, and they plan on generating revenue from this investment starting 2019. This seems late to me, but the cash burn of this company makes me comfortable they will have enough liquidity to survive until then.

The weekly chart shows a potential bottoming out (or a rounding bottom) pattern seen by classical chart principles in Edward McGee’s book. I like the entry point of $0.355 – $0.36. I know what you’re thinking, “you’re waiting for a 24% jump in this stock before entering, that’s crazy.” Yes and no. I’m more comfortable risking my capital at $0.36. In other words, I am willing to trade the potential 24% gain for the increased probability of catching a much larger move with a greater chance of success. Also, take caution: This company has a very low average trading volume of around 33,000 shares a day. In other words, average trading volume per day is around $8,050 per day. For those reading with larger accounts, it may be of better practice to spread your buys out over time once price crosses the $0.36 threshold.

Once again, shoot me any questions if you have further inquiry about this company, or any company I have highlighted in the past. If you find holes in my long thesis, please reach out to me, or comment below. I want to know where I missed something, and the only way for me to get better is to have light shed on my imperfections in my investment analysis workflow.