When we think of bar scanners, most of us think of the cashiers line at a Walmart, a Safeway, or if you’re in the top 1%, a Whole Foods. Since Square released its mobile POS system, the demand for mobile bar scanners increased exponentially. What I didn’t know was how diversified the application of such scanners could be over the next 5 – 10 years. A smaller, under the radar company, Socket Mobile (SCKT) is positioned quite well in this market, and has the potential to be a leader amongst the mobile barcode scanner industry. Let’s take a look at the industry overview to see future drivers and headwinds.

To Infinity, And Beyond

It’s crazy to think that back in 1950, the first ever application of a barcode scanner was for the sale of a pack of gum. Today, the scope of applications for mobile barcode scanners is growing at a rapid clip. We all know that they are used in retail spaces (think any store in a shopping mall), as well as grocery stores. Yet, according to Orbis Research, the future demand for mobile barcode scanners will be found in the healthcare, transports, and logistics industry. The industry as a whole is expected to grow from the $2.12MM of market value in 2016, to $3.18MM in 2023, with a CAGR of 5.9 – 7.6%. Currently the United States dominates the global share of market space, with around 33% of total market value. The tide is turning though as more Asian countries are opening their doors to the 2D technology. The example below paints a nice visual: 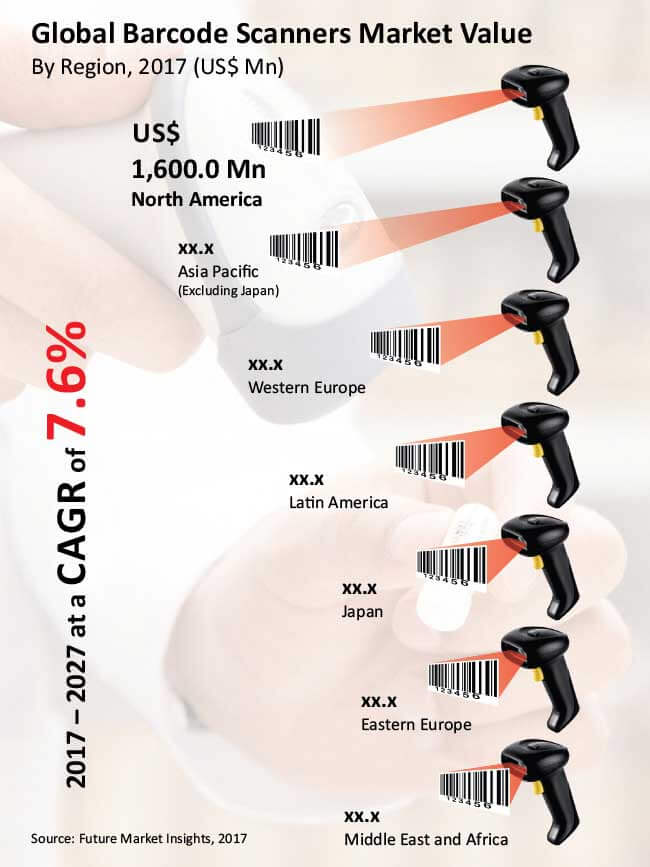 Within the market, the application that really excites me is the medical field According to the Institute of Medicine National Academies (IMNA), the number one cause of patient malpractice / injury / death during a patients stay at a hospital is misdiagnosed medicine. In other words, a lot of nurses and doctors give patients the wrong medicine in the heat of the moment.

With barcode scanned medicine, this has the potential to almost completely eliminate this awful mishap. For example, let’s take the logistics industry, like FedEx. When you get a package, there is usually someone there who scans the package, has you sign it, and then leaves. Or, if you don’t sign it, they still scan it once it gets to its destination. This then creates a real-time log of exactly what happened to that package, at what place, at what time. The benefits of this are incredible. Not only does it create transparency between the customer and the one delivering the package, but it becomes extremely easy to see where and what went wrong during a dispute.

The same thing could happen in the medical field. Each time a nurse brings medication to a patient, it is first scanned before giving the proper dose. This ensures that the patient is actually supposed to receive this medicine, and it keeps a logistical record of what times medicine was taken. This is an active obstacle for the medical field. In 2013, the National Patient Safety Goals set, ‘Identify Patient Correctly’ as its TOP priority. One instance where this barcode technology is already in use is in the Houston VA Hospital, where each patient receives a barcoded bracelet to wear, which when scanned, provides all medical information, prescriptions, and proper dosages to each patient.

Pondering more on the medical application of mobile barcode scanners, I wanted to see if there was a real, tangible catalyst for this industry segment growth. I found one through the FDA. The FDA recently mandated that, “all vendors of medicine must add a barcode to their medication.” This is huge because it now creates a mandated demand for barcodes, and hence barcode scanners.

The other catalyst for growth of the barcode scanner industry in medicine is potential cost savings of using barcode scanner systems. The National Institute of Health did an analytical study of a hospital that implemented these barcode systems and found that the hospital spent $2.24MM on the implementation of the system, but at the same time saw a costs savings of $2.20MM and a net benefit of $3.49MM in the same time span.

SCKT is a small, under the radar company in this 2D mobile barcode scanner business. With a market cap of $25MM and an enterprise value of $21MM, the company is followed by merely one analyst on the street. According to their website, SCKT describes themselves as:

Since becoming public, the company has done nothing but increase revenues, gross profits, net income, all the while growing their free cash flow over the last three years.

The Financials (amounts in Thousands)

Also it’s important to note while SCKT has increased revenues, gross profit, and net income, they’ve also simultaneously managed to decreased their operating expenses on an average annual level by nearly 2.26%. 86% of the sales in 2016 were composed of their cordless barcode scanners and accessories, an increase of 1% since last year. On the whole, total revenues from 15 to 16 increased 13%.

SCKT boasts some of the best margins in their industry, and it provides them with a significant competitive advantage against competitors their size and up. Operating margins stand at 13.51%, better than 84% of competitors. Net margin comes in at 52.40% which is better than 99% of the competitors in the industry.

The company also is a stallion when it comes to returning money to the shareholders through intrinsic value creation. The company has a 76.17% ROE, better than 99% of companies in the industry. Turning to Returns on Assets, the company is the best in the industry with 60.57%. Return on Capital comes in at 101.88%, and the 3-year EBITDA Growth Rate stands at 132.90%, better than any company.

Finally, taking a look at free cash flow, the company has averaged 44.73% annual FCF growth over the last five years. Those are solid numbers all around.

A company with the consistent revenue growth, superior margins compared to competitors, and an upward trend in FCF growth, it surprised me that they are only trading at 2x earnings and 1.23x Book Value. Even the fact that its trading at nearly 4x NCAV seems cheap to me given the profitability of this company. Also, the Earnings Yield % is 13.81, better than 84% of its competitors. Extracting out the present value of its discounted cash flows, you arrive at an average share price of $8.21, which presents a 57% discount to its current valuation.

Another thing I like about this company is the exclusive reduction of debt over the last 4 – 5 years while steadily increasing their cash reserves. In 2013, the company had $2.48MM in debt and $0.61MM in cash. Today, the company sports $2.87MM in cash and only $0.34MM in debt.

With a smaller company like these, its important to see where management has their priorities, and no better metric for that than Insider Ownership. The company maintains an insider ownership of 18.71%, a stark increase since their March 31st numbers of 7.83%. This shows me that upper management is willing to put skin in the game, money where their mouth is, and they really believe in the products they’re selling.

Where is the Catalyst … CHINA.

I briefly touched on the catalyst about the FDA requiring medical vendors to have barcodes on their products, but there is another catalyst specific to SCKT that makes it a very attractive speculation, if everything works out. That catalyst is China. I know, stay with me, we’ll get through this.

In their most recent quarterly report, CEO Kevin Mills announced that the various SCKT products will be available in China at some point this year. The process took longer than expected, which isn’t surprising given the tremendous amount of regulations that come with selling in China.

On top of the China catalyst, the company took efforts to develop and release their newest product at a cheaper price point than most of its competitors, without sacrificing quality. The company released the DuraScan D740, which was designed to be a durable barcode scanner with an IP54-rated outer casing. In other words, it’s designed to be tossed and banged up, while appealing to customers on tighter budgets. Regarding the new product, Kevin Mills said:

“Socket Mobile recognizes the advantages and demand for 2D barcode scanners, but understands the typical 2D imager carries an intimidating price. The D740 is intended to break the mold and be the affordable 2D option available in the market”

There are a couple of things that could derail the further growth and expansion of the company going forward. First, the company could run into legal and monetary troubles with receiving payments from China, which could mean money spent on infrastructure to sell in China lost, as well as opportunity cost. Secondly, and more real is the fact that most of their revenue comes from a small number of clients. If one of these clients decreases the amount of orders, or the company isn’t able to grow their client listing outside of their top customers, it could have significant detriments to future earnings.

Taking a look at the weekly charts, I see the potential for an inverse head and shoulders, as well as an ascending channel going back to 2014. I would like to try to enter on a breakout above the 50 MA as a starting point, and then if price continues advancing in my favor, steadily increase my line in the investment. For instance, I might take a 50bps bet once price crosses the 50MA, and if price breaks 4.90, add another 50 – 100bps as long as price is with me, and the fundamentals still recommend a buy.

As always, please shoot holes in this idea, I grow as an investor by learning what I am missing.